The Best Year Yet!

Here’s what we have been up to…

Do you recall seeing this on our blog?  That 20% of Corporate Luxury products go back to society? Well, in the closing months of last year, we achieved this through Trinitas Africa Foundation, an NGO that focuses not just on giving away but has an ultimate goal of creating a culture of safety, love, and compassion for the most vulnerable in Africa. Here’s what we did…

“They say a person needs just three things to be truly happy in this world: someone to love, something to do, and something to hope for.” – Tom Bodett

There’s a lot of reasons why the month of December is special to a lot of people, there’s more exchange of gifts and more time to celebrate living with loved ones. Joining in this, Corporate Luxury decided to embark on a giving spree of household items. The brand chose to call the project; “The Christmas Cheer” and spread the word of the project via several media; including on radio and face-to-face, making sure that the right people benefit from the project. The name of the project and this act gave people who were reached hope, certainty for at least two basic necessities; food and clothing.

“Genius is in the idea. Impact, however, comes from action.” – Simon Sinek

The people’s hope was not misplaced! On the 20th of December, just days before Christmas, the Christmas Cheer was actualized. Thousands of people gathered at the venue before the start time, the big banners and great security they saw in place were enough reason for them to call on their neighbors and friends to come and benefit too. Other organizations/ Corporate Luxury partners who heard about this project, decided to be a part of it and contributed in cash and kind.

Over a thousand bags of rice, chicken, and vegetable oil were distributed to people present, children’s clothes and shoes were also donated by Ava and George, who were part sponsors of the Trinitas Africa Foundation project; even children weren’t left out. Other Major sponsors were Corporate Luxury, CoinNest, IBIC Holdings, George Residence, Tiny Little Cakes, and so on…

“Humour is the best way to make the unbearable bearable.”   ― Mary Ann Shaffer

The exercise started at noon and people were organized in 10’s and ushered in. It was a great and orderly humanitarian exercise that brought about smiles to the faces of the recipients. The reactions were priceless; some women danced with their clothes, livestock, and foodstuffs in their hands, others knelt down and rained praises on the foundation. One lady in particular who we later came to know as Mrs. Funke Adebiyi fell on her knees shedding tears. She was one of the beneficiaries of The Christmas Cheer and had come with her two children.

Some interesting history to this woman and the foundation:

We met Madam Funke on the streets of admiralty, she was sitting by the roadside, asking for alms. She claimed to be widowed and without food for days, she and her kids. We gave her some monies and gave her a flier and a description of the Christmas Cheer and its venue on the d-day. After receiving the livestock and monetary items, she found a way to reach out to the foundation and show her gratitude. In her words; “I had a marvelous Christmas, for the first time since I became a  widow!”, and then she burst into tears.

Quoting Ade George, founder of Trinitas Africa Foundation, “the world needs more of this humanitarian effort. People need to know that it is okay to have hope and that the world can be a better place, we just need to start somewhere, make an impact in the life of people around you, this is what Trinitas Africa Foundation is about, giving to the needy and empowering them in the best way to fend for their self.” 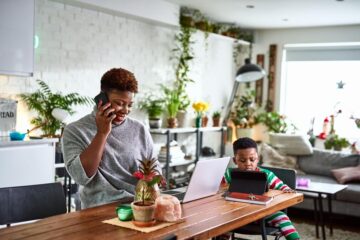 Dealing With The New Normal…

No products in the cart.

Your wishlist is currently empty.